Spotlight on our volumes

In this new series, the Society highlights some of the treasures in its 175 year history of publishing Scotland’s most important documentary sources. All of the volumes discussed are freely available via the digital edition at https://digital.nls.uk/scottish-history-society-publications/.

For our first ‘spotlight’ discussion, we are examining on of our classic texts, Lyon in Mourning, or, A collection of speeches, letters, journals etc. relative to the affairs of Prince Charles Edward Stuart by the Rev. Robert Forbes, Bishop of Ross and Caithness, 1746-1775, edited by Henry Paton, M.A., (Scottish History Society, series 1, vols 20, 21, 22, 1895). https://digital.nls.uk/scottish-history-society-publications/browse/archive/128329070

Lyon in Mourning was published in 1895 as three volumes, tackling the tragic aftermath of the 1745 Jacobite Rising. The volumes were edited by the Rev. Henry Paton, a prolific Scottish history scholar who published other Jacobite materials for the Scottish History Society, (Papers about the rebellions of 1715 and 1745, 1893) as well as materials for other societies. Paton was one of the great and the good of the Scottish history world in the 1890s, and it was common for ministers to undertake this kind of antiquarian work in that period: clearly their day job left them enough time to undertake the painstaking work of academic editing. His Lyon in Mourning is one of a number of Society volumes that focus on the Jacobite rebellions, highlighting the popular and academic appeal of the topic, an appeal which extends into the present day. A quick skim of our digital edition throws up numerous titles on Jacobite matters including The Jacobite Attempt of 1719 (1895), Prisoners of the ’45 (1928-9), Itinerary of Prince Charles Edward Stuart (1897) and Origins of the ’45 (1916).
Lyon in Mourning consists of letters, journal entries and speeches of Jacobites, collected by Robert Forbes, bishop of Ross and Caithness (1708-1775), an Episcopalian and ardent Jacobite, who was directly involved in the ‘45. The title speaks of his sense of loss and tragedy at the failure of the rising and his purpose in making the collection was ‘to make [it] as compleat and exact as possible for the instruction of future ages.’ It certainly achieves this, with the help of Paton’s skilful and balanced editorial interventions, and gives us a rich picture of the lived experience of the rising – from the defeated side – including touching last speeches and letters to family of those Jacobites executed for treason in the wake of Culloden. 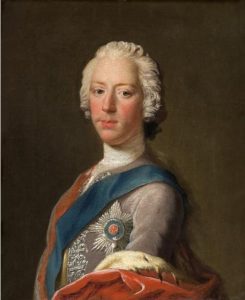 The volume is the result of many layers of intervention and collection, but is primarily based on the careful – treasonous at the time – work of Forbes, who guarded his collection carefully, as did his widow, before the manuscript passed into the hands of private collectors. It was only with the support of the Society that it was published and contextualised and made fully available to the public after over 100 years in obscurity for the benefit of anyone interested in this enduringly fascinating aspect of Scotland’s history.