The Scottish History Society and History Scotland magazine would like to invite entries for the annual Alasdair Ross prize, which aims to support postgraduate students and early career researchers undertaking archival research on Scottish history and/or environmental history. The winning applicant(s) will be awarded a sum of up to £500 to assist with expenses incurred during archival visits.

This prize is awarded in memory of Dr Alasdair Ross, who served as a member of the Scottish History Society Council and Editor of History Scotland prior to his death in 2017. It reflects his ground-breaking scholarship and his exceptional contribution to Scottish History generally both within and beyond the academic sphere, and his pioneering work in environmental history.

We usually request that the proposed research trip(s) should be conducted within a year of the award of the prize. This requirement will be relaxed in 2021-2 to reflect the ongoing disruption related to Covid-19. The prize-winner(s) will receive the award with the expectation that they should conduct their research when it becomes safe and legal to do so.

Anyone registered for any postgraduate degree at any university; anyone within five years of graduation with a postgraduate qualification. Applicants will be asked to affirm that they are not eligible to have the proposed costs covered in full by a guaranteed research expenses fund, such as from a university department/school or the funder of the applicant’s postgraduate or postdoctoral project, e.g. the Scottish Graduate School for Arts & Humanities. If the applicant has also applied to other, non-guaranteed, funding competitions, we ask that they should inform us in the case of a successful outcome, before or during the term of an award from the SHS.

Previous winners of this prize are not eligible to re-enter, but previously unsuccessful applicants are warmly encouraged to apply.

To enter, please email a 2-page CV and an application form to Dr Martha McGill at secretary@scottishhistorysociety.com. Application forms can be downloaded below. The deadline for entries is 31 March 2022. Informal enquiries are welcome.

Entries will be judged by the Council of the Scottish History Society. The winner(s) will be announced by 31 May 2022. The Society reserves the right to award more than one prize per year, or not to award the prize.

Prize-winners will receive a sum of up to £500 to assist with the costs of travel, accommodation and other expenses incurred while conducting archival research. They will also receive one year’s membership of the Scottish History Society, and a one-year subscription to History Scotland magazine.

Prize-winners will be asked to submit a blog post about their research trip (250-300 words), which may be published on the Scottish History Society website. They will also be invited to submit an article based on their findings (c. 3,000 words, negotiable) to be considered for publication in History Scotland.

The support of the Scottish History Society should be acknowledged in any publications arising from the funded research trip.

Submission with a 2-page CV to secretary@scottishhistorysociety.com by 31 March 2021.

Dr Rebecca Mason, our inaugural Alasdair Ross Prize winner, describes how the Prize enabled her to work on her ground-breaking research into women, property and law in early modern Scotland.

The Alasdair Ross Prize has enabled me to gather archival evidence on women’s access to law and rights to property in early modern Scotland by funding two archival trips to Inverness and St Andrews. My research to date has focused on the litigating activities and property rights of women in seventeenth-century Glasgow, with special attention paid to the lives and experiences of married women in particular. In Scottish legal handbooks, married women were denied an independent legal identity and lost control of much of their property upon marriage. A married woman needed her husband’s consent before registering a contract of initiating a legal suit. A husband gained ownership of all household goods and assumed administrative rights to his wife’s inherited property. However, when looking closely at how married women were recorded within the legal record, we can see that married women’s access to law and rights to property were framed around their family relationships, their marital careers, and their credit networks. Tracing married women’s interaction with the legal system in practice brings to light the varied nature of their legal activities. They denounced those who sought to deprive them of their property rights and actively negotiated their marital property alongside their husbands. Most importantly, married women compelled the law to listen to their voices and property concerns by hiring lawyers to act on their behalf, or by appearing before a judge as plaintiffs or defendants in property disputes.

Rather than appearing as perpetual victims at the mercy of a patriarchal legal system, Scottish women were active court users and litigants when asserting ownership of their inherited property, or when claiming their rights and interests to their marital property. In Inverness, for instance, I have found married women entangled in family litigation when asserting their rights to their marital property. In May 1682, Christine Fraser, the widow of Alexander Fraser, a bailie of Inverness, and the new wife of William Cumming, a lawyer, sued her stepson John Fraser before Inverness burgh court. Christine alleged before the town bailies that her late husband’s son was refusing to honour the property arrangements agreed in her first marriage contract, which was drawn up 11 years previously in 1671. She told the town bailies that her late husband had placed her in joint ownership of a house upon their marriage and that, as his lawful widow, she was legally entitled to collect the rents of the property until her own death. Even though she was a wife, Christine held existing interests to her previous marital property that circumvented her theoretically subjugated legal status. Like many other married women, Christine was successful in her legal action. In St Andrews burgh court, I have also encountered married women actively managing their inherited property. In June 1626, Elizabeth Balfour, the wife of Simon Ward, a mariner, mortgaged her inherited land to another merchant in return for an immediate cash payment. Elizabeth noted in the contract that she had received the land following the death of her father Duncan Balfour, a church elder in St Andrews, and that the land rightfully belonged to her and her future heirs. Elizabeth’s name appeared before her husband’s name in the legal record. Her husband Simon was simply named ‘for his interest’ in her legal action. Rather than hiding behind their fathers, husbands and sons, women were active court users and litigants in early modern Scotland, with their interests to land and goods recognised and upheld by the legal system.

As part of a postdoctoral project at the Institute of Historical Research in London, I am uncovering how women living across Scotland negotiated their access to law, and how their appearance before the courts varied in accordance to jurisdictional boundaries, language, confessional identity, and social status. The Alasdair Ross Prize has greatly assisted me in bringing Scottish women to the forefront of early modern Scottish court records. 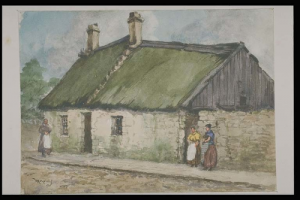 Details from John Speed’s map of Scotland in the version published in the Interregnum, showing Lowland and Highland women. Wikipedia. 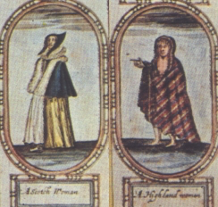